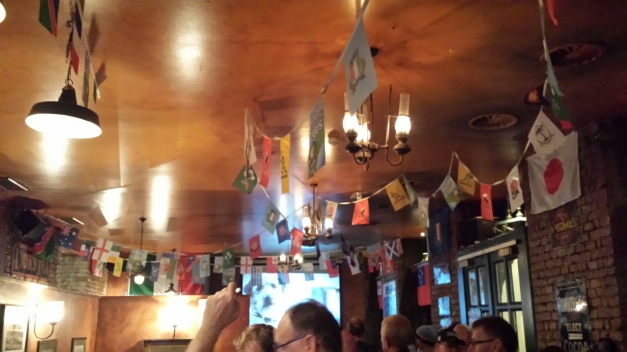 The Rugby World Cup is on,  and there aren’t many places one can go to watch it in the city,  as the interest in rugby is very limited in Austria. The Australian pubs sometimes show rugby, and Shebeen, but if you want to be certain, Flanagans shows most games whether it be Rugby Championship, Super Rugby, Six Nations or just a test game.

Nowadays it’s made all pretty for the World Cup,  and there was nothing wrong with the atmosphere when we watched England go out of the tournament yesterday. Poor England. At least co-host Wales is still in it!

I’ve been wanting to write something for a while now about what it’s like here at the moment, with all eyes directed at Central Europe because of the stream of refugees. When I read news stories from abroad, I get the impression that foreigners think we’re being overrun by refugees and that all our streets are full. Well, that’s not the case here in Vienna. To be honest, I think if I were a nice old lady who didn’t read the news and who only went around town on my errands, I wouldn’t have any idea that something this big was happening. At all. But, ther are a few ways that we notice. A few.

For example, the picture of the post is from Westnbahnhof late one night earlier this week. It’s not a clear shot but then I did feel that I was imposing big time just by snapping a quick shot, and I’m happy that it’s probably too crappy to identify people by. But it hits you if you take the trip down to Westbahnhof (which I wouldn’t recommend unless you’ve actually got business there). There are people sleeping on the ground, all over the train station, because they want to continue the next day or whenever they can catch a train. If you go 50 metres away from the train station, you’re out of the refugee zone and you notice nothing. The rest of the city is working just like normal.

Another thing is that border controls are back, and trains North and East are not running regularly. In fact, some are not running at all. Going to Budapest, which can be a nice break away from Vienna, is not recommended nowadays. At least not if you want to go there and make it back here by train…

I’m reading the papers every day to see how the situation is changing, and it is changin a lot. People in Vienna have also done a fantastic job at taking care of the refugees, suddenly everyone wants to help. But, there is a lot of superficial stuff happening (clearing out the crap from one’s wardrobe without being too critical) and news are coming from Hungary about their way of solving the crisis…which is to fence off the countries that pose the biggest problem. Serbia to start with, and now they’re considering Romania. Funny, because Austria realised early that these people want to go through and not stay, and so the borders were opened to allow that. One would think Hungary could do the same. But as of yesterday that’s also over in Austria. Now it’s border controls and the works, for the first time in many years. Companies are complaining that they are losing revenue because of hour long queues on the borders etc…

There are good ways that one can help though. Here are a few web sites if you are in Vienna and you want to do something:

http://refugees.at/ (Which tells you what is needed in terms of supplies)
http://www.trainofhope.at/ (What’s happening at Hauptbahnhof in Vienna)
https://www.facebook.com/groups/Vienna.EAAR/ (Facebook group for Expats in Vienna, where you can get info about what you can do)
http://www.fraubock.at/aktuelles/ (The homepage of Ute Bock, who helps homeless people in Vienna, and now also refugees).
Vienna Würstelstand, which is an excellent magazine from Vienna about what is happening around the place also posted an excellent post about what you can do to help in a meaningful way.

But for those who would rather close their eyes and get on with their lives and try not to think about what’s happening, that’s also possible. That’s what it’s like here now.

In spring, there is a team of bicycle repair men/women that travel around the city to help people get their bikes ready for the summer. Bless them! This is the team in action in my neighbourhood two days ago. To check their schedule go to http://www.radrettung.at,&nbsp; they drop by every district in the city!

I like some of the playgrounds around Vienna. They are being kept in good shape! I remember growing up, visiting many ill kept playgrounds… in smaller towns they often get trashed by bored youth. It’s cool to think that here kids (of all ages) have enough leisure time offers. Good for the little ones and the teens!

Leading up to Christmas I’m sure that there are many who wish that they could take care of their errands to the post office during the weekend.  And it just so happens that there is a place for us to go here in Vienna if we need a post office late on Saturday or on Sunday! 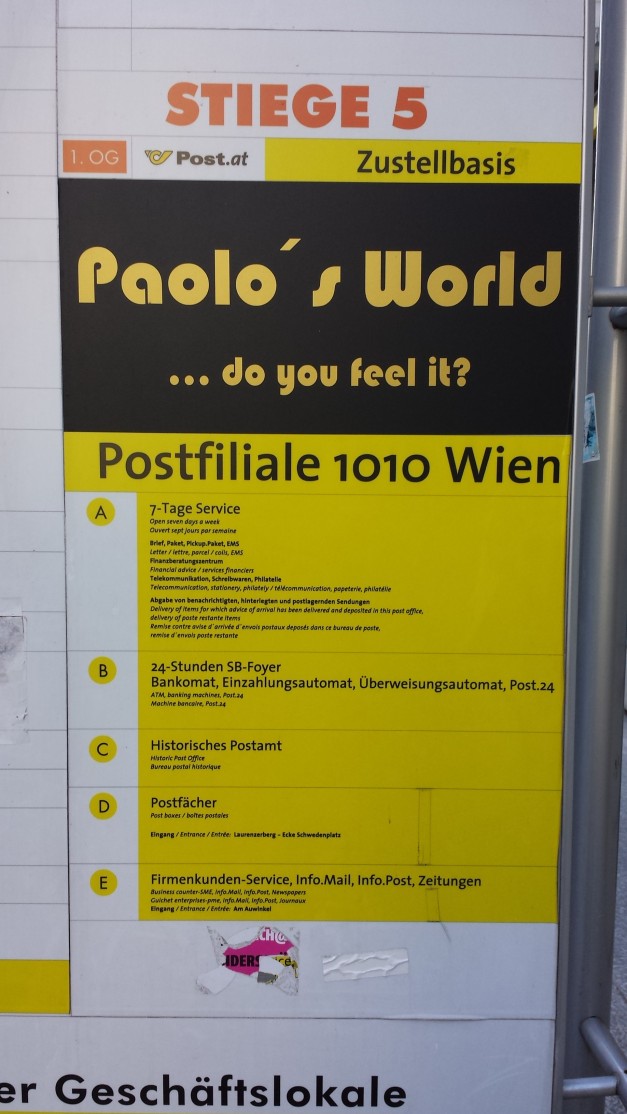 The opening hours at the post office on Fleischmarkt are much more customer friendly than we are used to from our local post office.  It’s just up from the subway on Schwedenplatz. 🙂 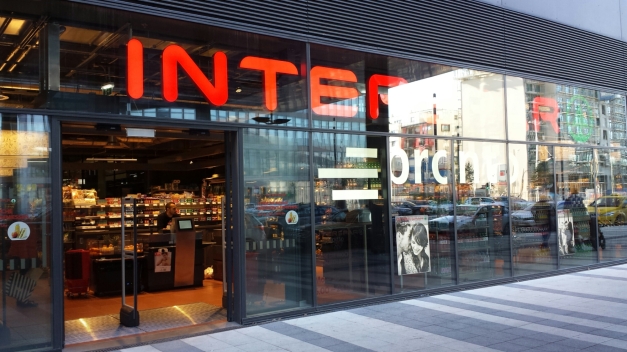 I’ve taken it upon myself to check out all the supermarkets that are open on Sundays in Vienna (see https://tinasrabbithole.wordpress.com/2012/11/25/the-supermarkets-that-are-open-on-sunday/) . Since Hauptbahnhof opened last weekend we have a small Spar that’s open on Sundays now. Today we ventured out to have a look. It’s a far cry from the Billa at Franz Josef Bahnhof or Prater, which are the biggest shops open on Sundays, but we were quite satisfied with the selection. It’s definitely good enough to keep you alive if your fridge and pantry are empty. The vegetable selection is decent, you can get meats (though no Sunday roast, sorry), drinks, snacks, baking etc… etc. It looks as though all the bakeries at Hauptbahnhof are open too on Sunday, so no need to get your bread at Spar.

On Donauinsel there are many areas where barbecuing is allowed (link with map). We got ourselves a disposable BBQ and made our way there this weekend. 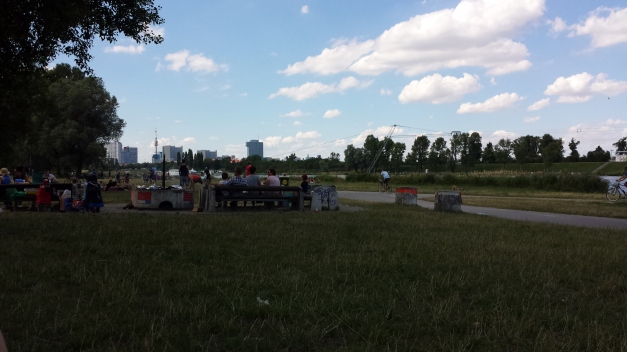 We normally go to the area that’s just by the wakeboard lift, just because of habit I suppose, but it’s also nice and chilled out. And has a public toilet.
Our trusty bbq: 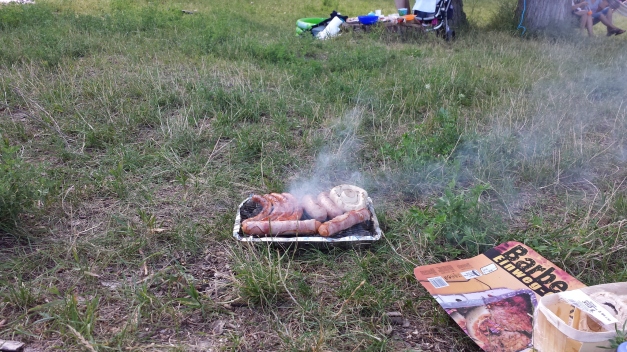