Wikipedia had to teach me today what Theresianum is. I stumbled upon it on a walk through the 4th district. So, it (Theresian Academy, Öffentliche Stiftung der Theresianischen Akademie in Wien) is a private boarding school governed by the laws for public schools in Vienna, which was founded by Maria Theresa of Austria in 1746. Clever woman that. A brief history overview:

In 1614, the Habsburgs purchased Angerfeldhof, a farmstead located just outside Vienna, and renovated it; Favorita (oooh, that probably gave the name to the street that it’s on, Favoritenstrasse), as the Habsburgs would call the re-modeled farmstead, became their imperial summer residence and a well-known venue for performances in the second half of the 17th century. Though the residence was burned down in the course of the Battle of Vienna in 1683, a bigger and more glamorous New Favorita was rebuilt over the following decades. Three Emperors of the Holy Roman Empire – Leopold I, Joseph I and Charles VI – resided in the castle. When Emperor Charles VI died in 1740 in New Favorita, his eldest daughter Maria Theresa decided not to enter the building again. So there! Now what to do with the building?

In 1746, Maria Theresa sold the castle to the Jesuits for 30,000 guilders in order to transform it into an educational institution, preparing talented young men for civil service. As stipulated in two founding letters, the newly established “imperial academy” under the auspices of Maria Theresa was based on the principles of strict selection, highest pedagogic and scientific standards and instruction in “modern” foreign languages.

Fast forward until today: Theresianum operates as a Gymnasium (U.S. equivalent grades 5 through 12); as of 2010, 815 students attended 33 classes (i.e., 24.7 students per class) and were taught by 130 instructors (i.e., 6.3 students per instructor). To read more about it, if you really should be interested (you never know), follow this link to Wikipedia. 🙂 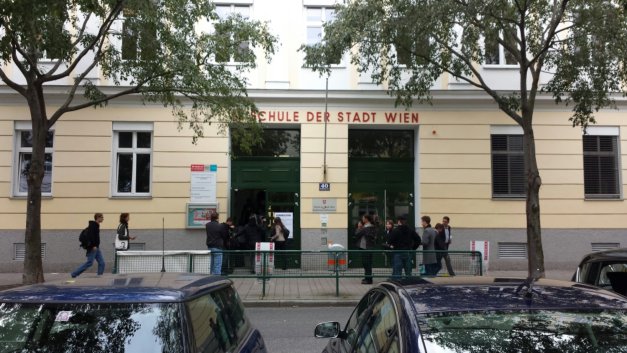 Oh thank heavens that it’s finally here!! It’s election day today, so many schools all over Vienna is host to voting booths, as with this one. Not sure what was going on there… maybe some tv channel that wants people’s voices for the evening news.. or perhaps some celebrity that’s voting? Dunno. I’m just REALLY STOKED that it’s all going to be over tomorrow!!!! Hurrah! 😀